The arrest of one controversial blogger Abraham Mutai on Saturday sparked a wildfire on social media, with the hashtag #FreeMutai trending for much of the weekend. His arrest was taken as an affront to freedom of speech which has been a hot topic of debate in recent weeks. Mutai, had been seen as exposing ills such as corruption before the collapse of his social media accounts and blogs. Intent on adding his voice into the whole debate was popular investigative journalist Mohammed Ali affectionately known as ‘jicho Pevu’. Ali known for his daring exposes on KTN appeared to be poking a hornet’s nest after a series of Facebook updates appearing to mock the government as he fervently advocated for Mutai’s release.

He repeatedly cajoled the government and even dared the government to arrest him for undermining it on social media, the hysterical Ali posed with a Gor Mahia T-Shirt to drive his point home. Mutai has since been released. 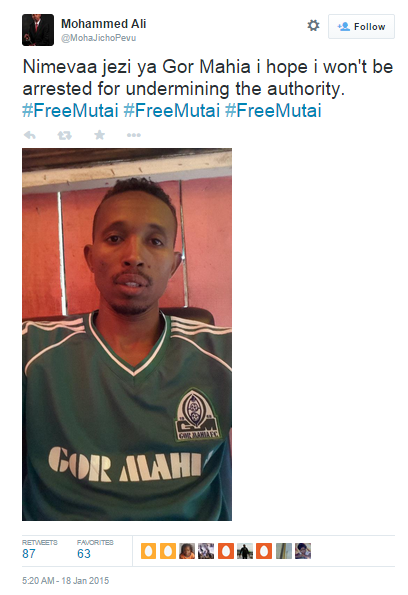