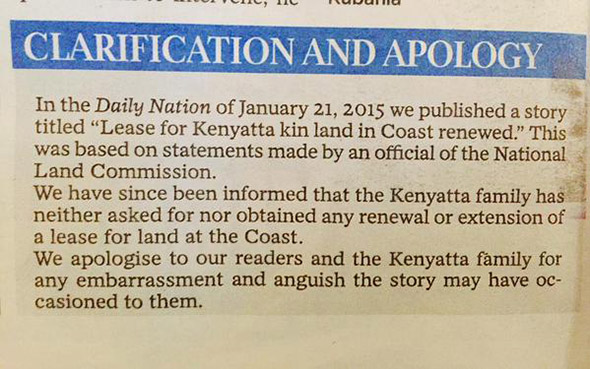 Ever since the reign of Kenya’s first president, Jomo Kenyatta, the Kenyatta family has had the privilege of owning large tracts of land all over Kenya. Some even say that combined, Kenyatta’s land can total up to a third of the whole nation. How true these estimations and claims are is not clear. What is however clear is the fact that they have written their name on very huge pieces of land.
The Daily nation on January the 21st 2015 published a piece that insinuated connections of the first family with a land saga at the coast. This story had been based on a statement that was made by one of the top officials from the National Land Commission.

These were however baseless facts that did not serve to inform the reader but only tarnished the name of the first family.

The Daily Nation have taken the first step to apologize for the article which caused massive embarrassment and anguish to the family.