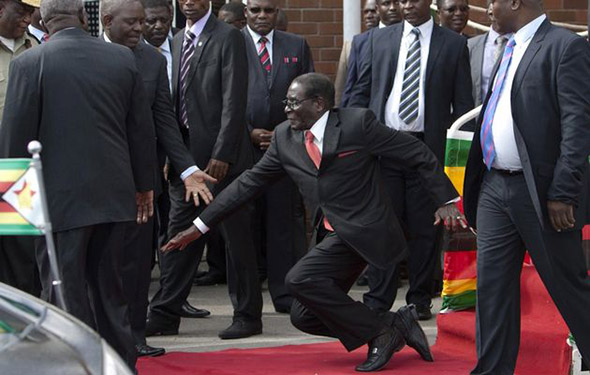 Seems everyone has had a good laugh when Mugabe landed on all fours at the Harare International Airport. Everyone Laughed, everyone except Mugabe and now his security detail.

After the world went up in arms and made jokes on the presidents fall in every imaginable position, security agents of the Zimbabwean President no longer have smiles. The said security agents who were caught napping on the job have been suspended. This is to allow for investigations on why the president was not ‘saved’. Since it is protocol for the” bullet proof men” to only be 3 meters away , it seems a major loop hole has been found and the fall should not have happened. The question of an attempt on the president’s life is what seems to be most disturbing to the ones in charge of the president’s security detail.

Even though it is obvious from past experiences that most of them will not be coming back to work, one cannot help but get a good laugh out of it, as this is the only time that the all mighty Mugabe is seen to be human.