Warning: file_exists(): File name is longer than the maximum allowed path length on this platform (260): D:\InetPub\vhosts\ziwapete-17432.package\infobare.com\wwwroot/wp-content/themes/truepixel/single-post-this-is-the-unsettling-press-statement-on-the-murder-of-a-student-at-moi-university-that-has-left-many-wondering-why-they-were-mocking-aviation-college-in-the-first-place.php in D:\InetPub\vhosts\ziwapete-17432.package\infobare.com\wwwroot\wp-includes\template.php on line 640

Warning: file_exists(): File name is longer than the maximum allowed path length on this platform (260): D:\InetPub\vhosts\ziwapete-17432.package\infobare.com\wwwroot/wp-content/themes/truepixel/single-post-this-is-the-unsettling-press-statement-on-the-murder-of-a-student-at-moi-university-that-has-left-many-wondering-why-they-were-mocking-aviation-college-in-the-first-place.php in D:\InetPub\vhosts\ziwapete-17432.package\infobare.com\wwwroot\wp-includes\template.php on line 643

Moi University, Main Campus in Eldoret woke up to the shocking murder of a student. The unfortunate incident led to violent demonstrations by students who blocked sections of the road leading to the university. This happened when the police tried to retrieve the body of the deceased who was a 3rd year student pursuing Education in the School of Arts and Social Sciences. The situation at the institution is now calm with the police having arrested two suspects in connection with the murder. Investigations into the criminal act are going on to try and establish what happened to the student as she made her was back to her living quarters at rented hostels near the campus.

A press statement released by the university’s administration to address the incident, has piqued the interest of many for its casual and pedestrian use of language and tone which does not reflect an office belonging to a higher institution of learning. Some grammatical mistakes in the presser show the hurry the administration must have been in to address the country on the grave incident, that they did not have time to proofread it. After the expose of a popular college recently, questions have been raised about the quality of education in the country and if the press statement by Moi University is anything to go by, then thee us a lot of work to be done.

Here is a pic of the release: 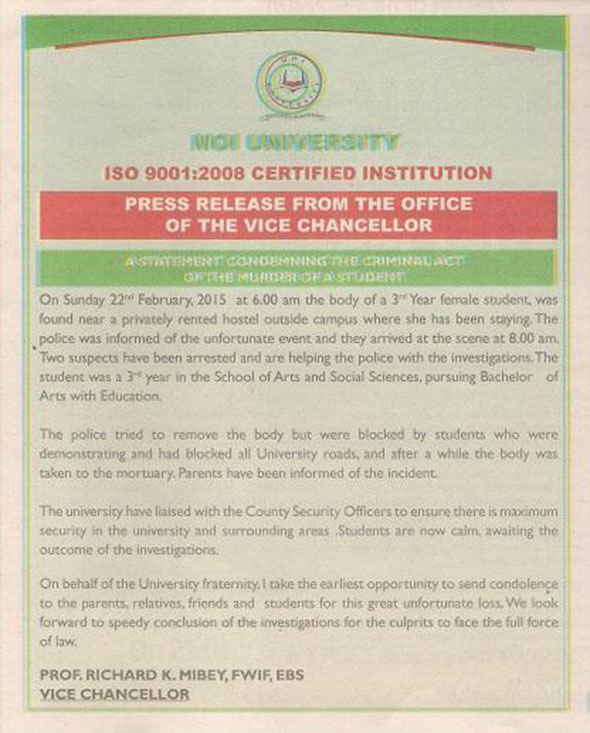