Over time Kenyan politicians have been known to have serious wardrobe malfunctions from torn socks which seem to be very common to now BABA’S torn shoes. This is not a major issue among common citizens as you could commonly spot a girl walking bare foot in town holding their torn sandal and no one would care but when it’s a politician it causes a lot of talk.

This usually leads to the question, whose fault it is?? The politicians??Or their spouses?? Well its fit to assume that a politicians spouse should be double cautious when dressing their husbands unlike other women as their husbands are 24/7 under the watchful eyes of the camera. But it’s also safe to assume that the politicians themselves being grown-ups should know that wearing a torn piece of cloth of men of their standards should not be even an idea in their minds.

This leaves everyone with the question what would a torn sock or shoe be doing in their closets??

Here is the picture that has been trending courtesy of standard news: 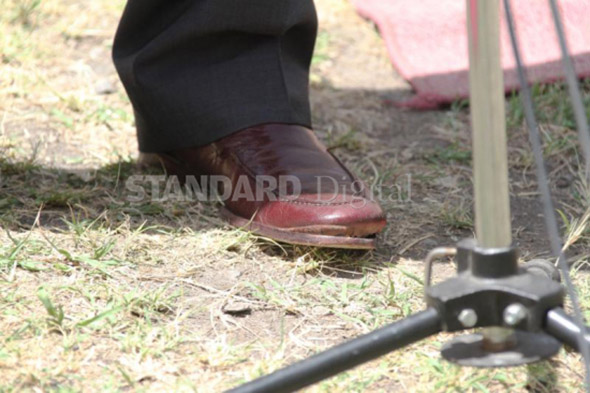