Home  »  Hot Gossip  »  Here Is Some New Evidence Showing How The Thika Widower,Daniel Ngiugi, Conned Uhuru’s Team, Kabogo And All The Kenyans Who Were Willing To Help Him?

After the highlight of the story of Daniel Ngugi and apparent widower at K24 it seems many Kenyans seemed to sympathize and empathize with him. A struggling father of twins, who overcomes challenges to take care of his children as a responsible adorable father. However shock on Kenyans as it seems all this was a way to get financial funding from good people.

Emerging stories is that the apparent dead wife is not so dead after all. She came out claiming that the story told is all a lie and that her name is Jackline Kendi and not Medline Chebet as the husband claimed. Interestingly this is comes days after the shop was stocked by kiambu sports minister Michael Wakiends with goods worth Ksh. 50,000 and the governor of Kiambu William Kabogo having paid rent for the shop for one year. Daniel story got attraction to the extent that he got aid from state house digital director who offered sh.120, 000 on behalf of the president.

Developing story is that the twins; Michael and Jane Ngugi are not twins after all and that they were born one year apart. What is more Nakuru hospital is backing her claims that no woman succumbed to the said injuries between April 2013 and April 2014. This is the same reaction the area chief and the bishop have, knowing that the wife is not dead and that she had actually fled for her life after the man used to beat her senseless.

Many are taking to social media to express their disappointment. However coming to think of it if a man can actually come up with such an ingenious way to con people, he deserves that money after all; it’s just another Kenyan looking for a living. Regardless, one wonders what is she going to gain stating that she is indeed alive, a woman who can actually leave her children with a violent man need not be hailed as a great woman, whether dead or alive. 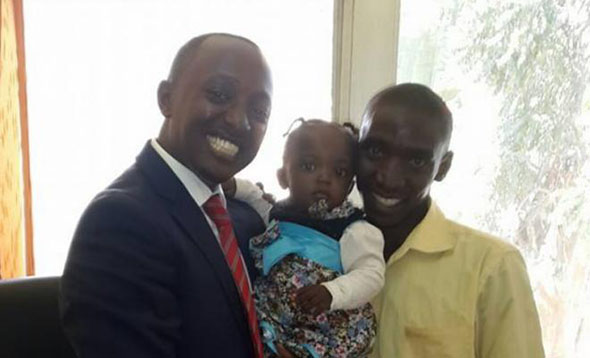