When news broke out that Willy Paul couldn’t locate his mother, most of his fans came to his aid. Willy Paul’s mother is said to be suffering from a condition that has led to depression and memory loss. She was last seen heading to a local “chama” in Kariobangi. Unfortunately she didn’t reach her destination and the matter was immediately reported to the police.

Interestingly, Jaguar who is in no way affiliated to the Kenyan Gospel industry came to his aid. Jaguar who is “well connected” helped him get in touch with the right people who eventually traced the last location of will Paul’s mother. According to Paul, his mother’s phone was last used in kericho a location which puzzles him since he has no relatives or friends residing there. A search party has currently been sent to the location to search for his mother.

Here is the post he put up, thanking Jaguar, his fellow artists and fans for the massive support they have accorded to him. 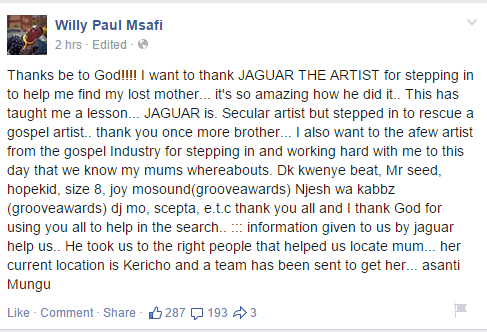